Ann Darrow is the leading character of King Kong.

Depression. Reduced to stealing food, she eventually meets a filmaker by the name of Carl Denham. She agrees to be in his next film and she sails with him and the crew to Skull Island. During the voyage she falls in love with one of the men on the ship, Jack Driscoll. When the crew and Ann reach the island, Ann is kidnapped by the natives who offer her as a sacrifice to King Kong. But Kong likes Ann and takes her with him. But the crew goes after Kong and knock him unconscience with gas bombs. Kong is then taken to New York where he breaks free from an exhibet. Finds Ann and takes her to the top of the Empire State Building. Kong is shot down by military planes while Ann survives and is reunited with Jack Driscoll. 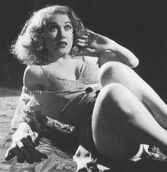