Carl Denham:It was beauty that killed the beast.

-Last words of the movie

Carl Denham is a filmmaker who takes footage of nature in the most deadly places.

Carl Denham is working on his next film but for this one he wants a leading lady, so he asks Ann Darrow if she can appear in his next film. She agree and Carl, Ann, and the crew go on a ship to reach an unkown island called Skull Island. Carl is very willing to take risks on this island while at the same time putting his friends into risk. Carl eventually changed his plan from taking film of the island to capturing King Kong and taking him back to New York. So Carl and the Crew throw gas bombs at Kong making it fall asleep. They take Kong back to New York and call Kong the 8th Wonder of the world. But the plan is quickly scrapped as Kong breaks loose and tears apart the city. Kong falls off the empire state building and dies and Carl says his famous last words. "It was beauty that killed the beast." 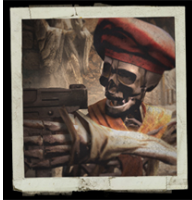