King Kong is a beast which is a giant gorilla. He appeared in the classic 1933 movie as well as a 1976 and 2005 remake. King Kong climbing the Empire State building has become one of the most iconic scenes of all time. King Kong would also appear in video games and be put in Japan movies.

King Kong lived on an island known as Skull Island out in the Pacific Ocean where he lives with dinosaurs such as a Plesiosaur. However, a film crew comes to Skull Island and explores. Kong then falls in love with one of their actresses Ann Darrow. Kong however goes unconscience when hand-tossed gas bombs knock him out. The film crew takes him to an exhibet in New York and call him "The 8th Wonder of the world." Kong does not like this though. He breaks loose and goes on a rampage in New York kidnapping Ann and taking her to the top of the Empire state building. Kong is then shot down by a barrage of machine gun fire from military planes. He falls off the building and dies. 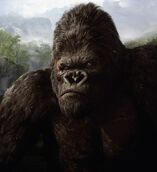