King Kong 2: Ikari no Megaton Punch is an Action Adventure game made by Konami and only in Japan based on the movie King

Kong Lives. The plot of the game is that after King Kong was shot down from the Empire State Building in New York he is in a coma. "When a Kong-sized female gorilla is found a blood transfusion is arranged from the female and an artificial heart is installed in Kong." Now that Kong has a working heart, Kong escapes from a facility and tries to protect the female Kong. Kong in the end manages to save the female Kong.

In this game you play as Kong from a overhead view. You must travel through nine mazes such as cities and thumb|right|338pxjungles and fight different enemies such as robots and large animals. You may find power-ups throughout the game which will give Kong extra hitpoints. There are also power-ups that will make Kong's rocks more powerful. There are many doorways hidden all over the place which could make Kong go to another part of that world or another world entirely. Kong must defeat the bosses of the first 8 worlds, each one holds a key. On the 9th world you will use all the keys to open a large door. In this game you are only given two lives. 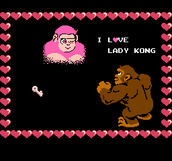 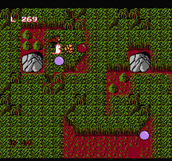